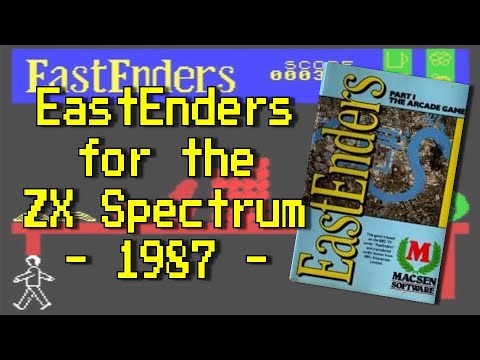 EastEnders was published by Macsen Software in 1987

I’d never heard of this game at all, which is odd, for at the time of its release – 1987 – I was smitten with EastEnders the TV show, whereas now I won’t give any soap opera the time of day. However, in a way I’m glad I never knew of this travesty of a cash-in, as it is possibly the worst game I’ve ever seen and I had three games in the Your Sinclair Crap Games Corner! You play a nondescript person on the corner of Albert Square and it appears that you must do odd, pointless jobs for the residents of said square. However, these tasks are never explained, described, thought out or checked for bugs! Worst still is this was another full-priced cash-in, so the poor EastEnders fans across the British Isles stumped up just under £10 to weep over this travesty of a game.

EastEnders can be found on the World of Spectrum here –

If you really hate yourself that much!

Remember to Like and Subscribe here and if you liked this why not fuel my Retrogaming habit here – www.ko-fi.com/villordsutch