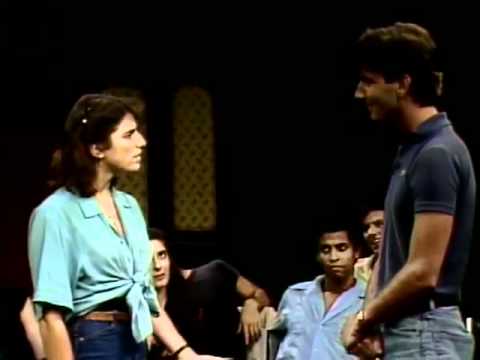 Sanford Meisner Masterclass is available at

A comprehensive Master Class in acting taught by Sanford Meisner, this 8 hour instructional DVD set is the only existing video record of Meisner’s teaching. Essential viewing for film, TV and theatre actors and directors, these DVDs also offer artists of all disciplines the opportunity to learn directly from a master who is now considered one of the most important acting theorists and teachers of the twentieth century.  In 1980, a group of Meisner’s alumni recognized the importance of preserving his teachings for future generations. They banded together and filmed a Master Class with Sandy, short clips of which were used in the 1984 PBS special Sanford Meisner: Theatre’s Best Kept Secret. Until now, the rest of the 28 hours of footage remained archived and unavailable. This DVD-set finally makes the footage from this class available to the general public; for the first time since his death in 1997, students can experience the Meisner Technique as taught by Meisner himself.
The viewer should be aware however, that the audio and video quality is not up to today’s standards. To make matters worse, Mr. Meisner himself is shown here after having gone through three surgeries to circumvent cancer and after having to re-teach himself how to speak. The beauty of this is that he becomes a living representation of one of his own maxims: “An ounce of behavior is worth a pound of words.” Still, without the provided subtitles, he would be nearly unintelligible on this recording. Adapting your ears to Mr. Meisner does not take long and you quickly understand that it’s well worth the effort. In order to facilitate this training for the viewer, the original recording of 1980 contains commentary with Martin Barter (Artistic Director of the Meisner Center and acting instructor). Anywhere its needed, Mr. Barter interjects his comments and explanations of Mr. Meisner’s theories and exercises. This commentary is invaluable.