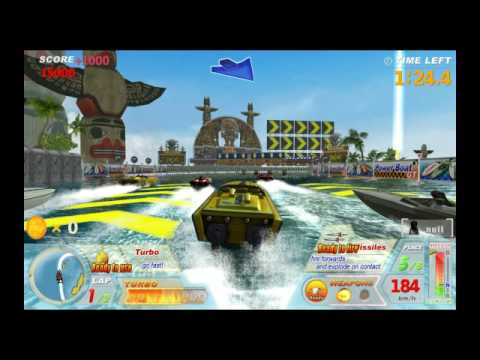 – PowerBoat V2.0 is a exciting boat race held in two locations South America & Europe.
– Nine tracks (Troy, Columbus, Greece, Mysterious Inca, Holiday Resorts, Easter Island, Rome, Olympiad and Viking Warriors) with beautiful realistic 3D graphic scenery and the Interactive Control Interface generate the thrill of speed boating.
– Players get to choose the characters of his/her choice to race the hottest boats that blast thru the beautiful waterways of S. America and Europe
– Five cool characters(John, Boris, Adina, Mr. White and Violet) and Ten hot boats compete in head to head competition bringing fun and enjoyment to players.
– The boats can be controlled with the help of the Steering Wheel and Throttle to move forward, left and right.
– During the race, players get the supplements of turbo power & weapons by the racing the boats over the Red and Yellow boxes.
– The Turbo Power helps race the boats at a higher speed and weapons help to hinder competitors from going ahead.
– At the completion of each tracks, players will get the scores added up according to time taken to finish each track and position achieved with a victory cup. The highest scorers can sign and list in the top 10.